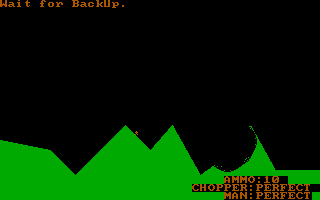 Fly your chopper and complete various missions in this simple helicopter simulation game. You create your own pilot, and as you complete missions successfully, your pilot gets promotions, and the game goes on until either the pilot gets killed in action, or gets promoted all the way to General, thus retiring the pilot. To start a mission, you select your pilot and choose your difficulty. Each difficulty has its own group of missions, and the mission in your choice of difficulty is randomly selected each time. The objective in a mission can be destroying an enemy aircraft or building, delivering something to another friendly base, stopping a cruise missile, or just destroying all the buildings in the enemy territory. If you get killed in a mission, then your pilot is permanently dead, and your only option is to create a new pilot or use a different one. If you complete a mission without dying, however, you get points, and if you have enough points, you get promoted to a higher rank. Basically, you beat the game by completing missions without getting killed until you're finally promoted to General, which is when your pilot retires. All the missions take place in one world, where there is one allied base on each end (you'll start at either of them), and enemy territory filled with buildings and aircraft in the middle. The gameplay is non-linear (aside from mission assignments), and allows you to go wherever you want and complete the mission in any way you choose. Even after you successfully complete your assignment in a mission, you can still fly around and do stuff like explore, or destroy other enemy buildings and warcraft, with the mission only ending when you land back at the base you started at (or the other base). Your helicopter is equipped with bombs, nukes and missiles. You can fire the bombs straight at objects, or drop them below you. Nukes are more powerful, and are more effective at destroying things. Missiles are also relatively powerful, and fly fast and straight. All your ammo is limited, however, and you can reload any time by landing at one of the allied bases.