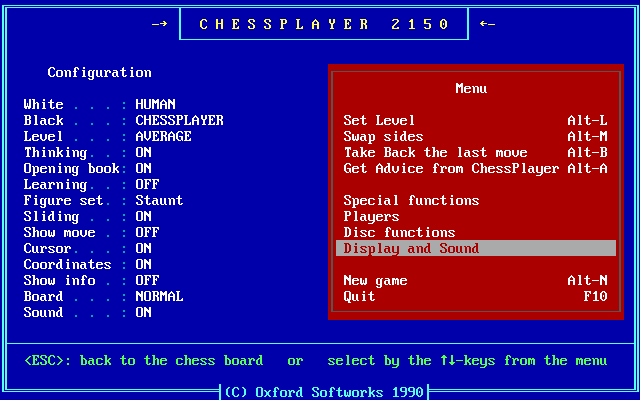 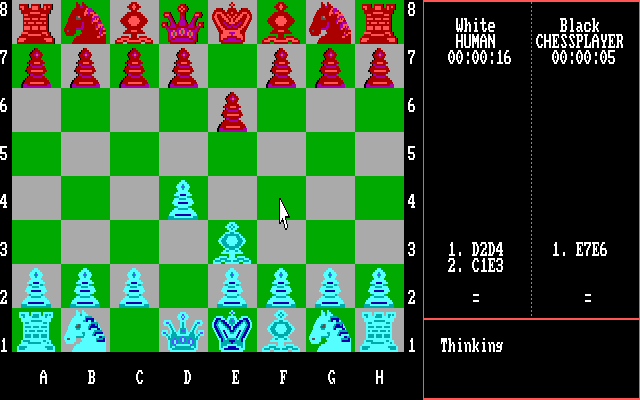 Chess Player 2150 is a chess program which played well against the other chess programs of the day and won the 1989 British Open Personal Computer Chess Championship (according to a post in ST Report International Online Magazine, November 13, 1992, No.8.45). The author was not shy about his program's prowess. Built into the program is a pull-down menu, giving it's performance against Chessmaster 2000, Chessmaster 2100 and Colossus X, in 10 games apiece. The game was designed to improve as it played, so over time a game that played against good players would be much better than when it first began. Users have the option of saving, so that the gained intelligence isn't lost. Although the author clearly wanted the game to be used by serious chess players, he included whimsical chess pieces as well. One set includes farm animals (sheep pawns, dog rooks, horse knights, chicken bishops, cow queens, and pig kings); Another setting includes Science-Fiction pieces that look like aliens. The game can be played in 2D or 3D, and includes digitised speech on the Amiga version.