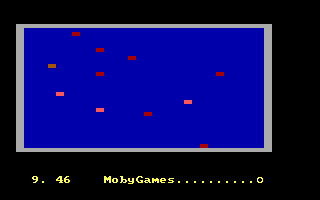 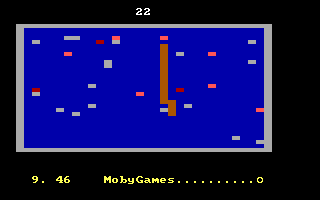 C-Mato is a Snake-type game which brings its own rules and options to the table, although the familiar game mechanics are still here: you guide a wiggling worm (brown) through a rectangular playfield, eating apples (red and orange) to grow and to score points. Reversing, doubling up on your own tail, or slamming into obstacles will put an end to your indulgence. The twist lies in the four available game modes: Normal - eating apples will spawn new wall blocks, although they're removed whenever the screen gets too crowded. As long as you go in a straight line, every apple you eat will double in value (1, 2, 4 points and so on); making a turn will reset the value to 1. Slow - as above, but at half speed. Points are only awarded for every other apple, although the bonuses for straight-line sequences can get larger. Tactical - no new wall blocks appear. The first apple eaten after a turn scores no points, so straight-line streaks must be exploited to rack up a good score. Tactical II - as above, except that making a turn takes away one point; however, this game mode features the most lucrative straight-line bonuses. The top 9 scores are kept on file, and for an extra competitive touch, your current ranking is constantly shown and updated as you play. C source is included with the game.