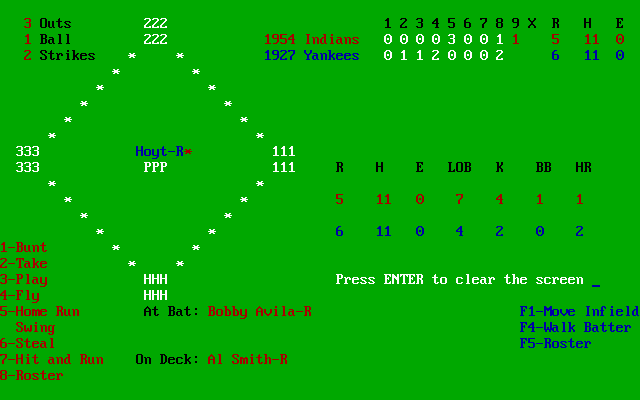 Pit historic and legendary baseball teams from 1901 to 1989 against each other with accurate team members and stats in Budget Baseball. This top down sports simulation plays more like a strategy game with a dash of RPG thrown in for chance rolls. After the initial selection of team members simple ASCII graphics are used to represent where they are on the field. Typical placement of hitters and pitchers are also done before a game starts. As opposed to controlling what your player does with graphic instructions you select from a menu how your batter will react to pitches. You can bunt, try to hit a single and even try for a home run hit. While this happens you can try and force your runners to steal if they can and all successful moves and failures are determined with a chance roll by the AI. After your turn at the bat is finished it's your turn to play batter again as the opponents or pass the controls over to a friend via shared keyboard and let them have a go. The shareware version of the game comes with nine pre-loaded teams including; 1989 San Francisco Giants, 1988 Oakland A's, 1975 Cincinnati Reds, 1954 Cleveland Indians, & the infamous 1927 New York Yankees. More teams of the registered players' choice could be purchased upon registration.