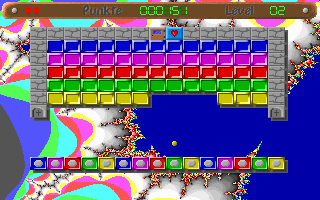 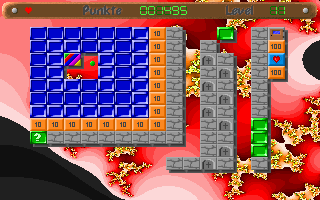 Bubble Blobb is a German action game, similar to Crillion. It is like Breakout except there is no paddle and the player controls the ball directly. The ball will always bounce up and down and the player only controls its left and right movement. When the ball hits a block of the same color one or two times they are removed. The ball will change color when hitting certain "color changer" blocks. The object of the game is to remove blocks to clear a path to the exit to move to the next level. There are also rainbow blocks that cause the ball to randomly change color for a while. Special blocks, marked with a question mark, cause the level to change when hit. Usually special blocks will remove walls or reveal other blocks such as the exit. Movable blocks, marked with arrows, can be pushed around by the ball, but only when the ball is the same color. There are also deadly blocks; when hit the player loses a life.