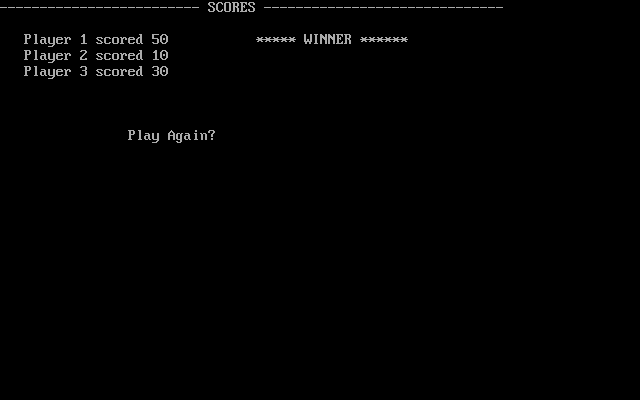 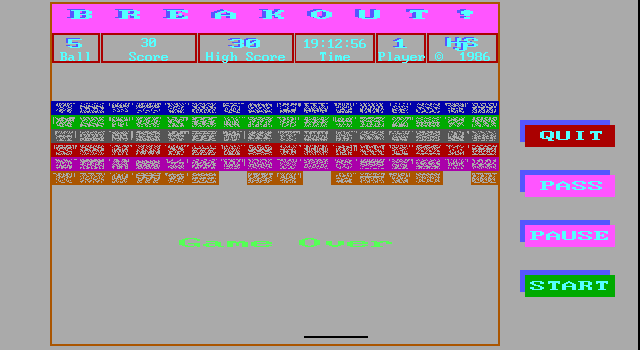 Breakout ! is an early version of the classic brick breaking game. Basically this game is like all the others, the player has five balls and must keep them in play by moving a paddle along the bottom of the screen. The ball(s) bounce around the screen destroying bricks that they hit and thus the player scores points. This game was designed to be used with a mouse, though a keyboard can be used if necessary, and it does have some unusual features. The game area is split into two sections and the game starts with the mouse positioned over the right hand window where the menu options are. As soon as the player clicks on START control switches to the left hand area where the game is played and moving the mouse left & right now moves the panel. Any further click of the mouse switches control back to the menu. This can be played as a multiplayer game. When the game loads it asks for the number of players and there is no upper limit other that what can be supported by the machine's memory. In preparing this submission a game was played with forty four players but the game documentation claims that a machine with 640K of memory should be able to support 'well over three hundred and fifty players'. During the game the player can swap to the menu section and PASS. This means their game is put on hold and the next player can take their turn, when the first player's turn comes around again their game continues from the point where they left off. There are no fancy arrangements of bricks in this game and no power-ups, just a plain wall. When a player breaks through the wall, and their ball starts bouncing between the back wall and the last row of bricks, the game enters 'expert mode' which means the ball moves faster and the paddle shrinks. The menu area has a QUIT button, however this does not stop the game it just stops the game for that player so when playing a multiplayer game each player must QUIT individually if they want the game to display the end of game scores. There are no in-game configuration options but, as was common at the time, the developer did provide some command line options that affect the gameplay. The machine was written on a ZENITH Z200 system which the developer says "is approximately equal to a 8MHz PC/AT" so a command line switch that will cater for both faster and slower machines. There is another command line option to disable the sound made when a ball hits a brick