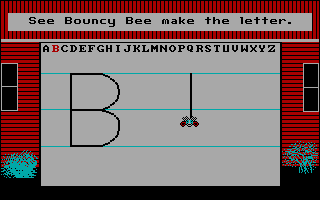 Bouncy Bee Learns Letters is an educational game for children 4-8 designed to improve reading skills. The game includes several activities to help with recognition of letters in the alphabet: Fantastic Flying Letters : In this game the letters of the alphabet are introduced by Bouncy Bee along with a noun picture word that begins with that letter. This activity gives children an opportunity to practice reading and saying the letters, as well as seeing lower and upper case variations and some words that use the letter. Grandfather's Beehive : In this game various letters and symbols move on the screen from left to right; the space bar needs to be pressed when a letter that matches the given letter appears on the screen to earn points. This activity gives children practice moving their eyes from left to right as is done in reading as well as recognizing letters amongst various distractions. Filling the Honeycomb : A honeycomb is displayed on screen with many sections displaying changing letters. Children guide Bouncy Bee around on the honeycomb and need to walk over each empty cell when a letter matching the given letter is displayed. When successful, this will fill that cell with honey the goal being to fill each of the cells as fast as possible. Antagram Letter Game : Numerous ants in a field will slowly move around until they form the shape of a letter. The goal is to figure out what letter will be formed as quickly as possible. A correct answer earns a point, but an incorrect answer or time running out gives a point to the ants. The game is won by earning 10 points before the ants do. The game features several customization options allowing multiple difficulty levels as well as selecting the order in which letters will be utilized in the games. Also included in the instruction manual are several stories which can be read to children to introduce each of the games.