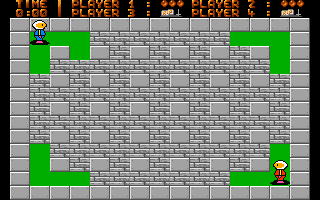 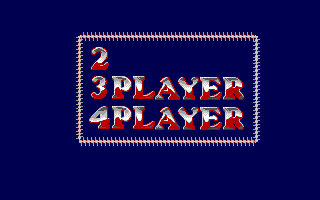 Bomber Boy is a game for two, three or four players and it is entirely keyboard controlled. Games are played over one, two, three or four matches. The game is a variant of the game Bomberman but without the storyline. Players start in opposite corners of a game area and place bombs to blow up the bricks that obstruct their passage, but running away before they detonate. The blast from each explosion clears one or more blocks and occasionally uncovers a bonus item. The objective of the game is to clear a path through to one's opponents and catch them in a blast thus killing them. Players have three lives and can only lay one bomb at a time. There were ten levels in the shareware version which has no single player option and no computer controlled opponents. However the full game promises thirty five levels, seven worlds, two computer opponents and Com2Com support