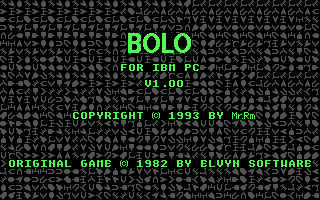 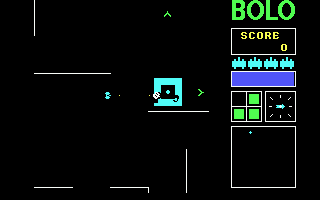 Bolo is a PC remake of the Apple II game of the same name: the player drives a tank, which can be steered in eight directions through the maze-like game world. Using your tracking sensor and radar screen, your goal is to seek and destroy all enemy vehicles, and the stationary generators which produce them. Enemy types vary in speed and behavior, and the generators are armored (requiring several shots to punch through their shields). The difficulty level and maze density can be modified before each game. As in Robotron: 2084 or Snipes, you can shoot in any direction, no matter where you're going - except that here the controls are relative, and the turret has to be manually rotated. You can adjust your speed up and down, stop, and even travel in reverse to back out of a hairy situation.