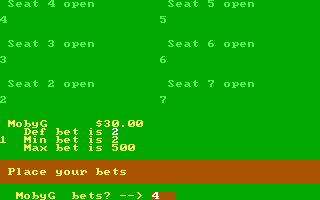 When IBM first conceived the PC, they had the foresight to design the four playing-card suites right into its built-in font. Of course, the implicit promise had to be fulfilled soon, and a set of casino games promptly followed; with Blackjack, IBM once again puts its money where its mouth is, and brings you another adaptation of the gambler's favorite. The basic idea is familiar: try to beat the dealer's hand - if no-one busts (goes over a total of 21), the hand closest to 21 wins; a blackjack (an ace plus a 10-value card) wins against any other hand. Up to seven players may participate (and join in or leave at any time), with the computer dealing. This version offers many variants, from Las Vegas Strip, Vegas Downtown, and Lake Tahoe/Reno to Atlantic City (a 6-deck game with optional early surrender) - and if those weren't enough, most of the rules and options can be tweaked individually. To avert the PR disaster that was clearly impending, and to dissuade the public from continuing to associate the Personal Computer with vice and moral decay, a disclaimer is shown:"no inducement to gamble is intended or implied."