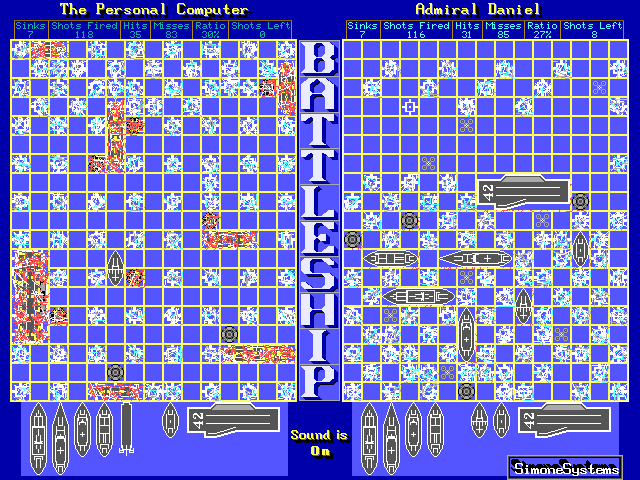 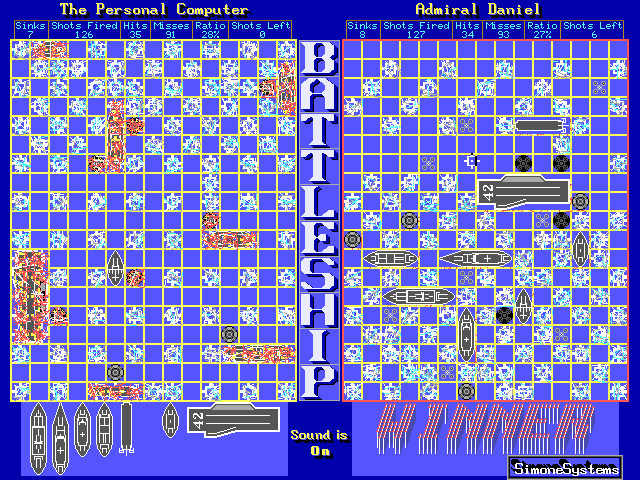 A single-player implementation of the classic Battleship guessing game, adding the element of sea mines. As in the traditional game, both sides – in this case a human player and his computer opponent – place the same number and selection of battleships on a grid. The grid has a size of 19×15 cells, and the 8 ships to be placed range from a 5×2 aircraft carrier, to spy ships and patrol boats occupying just 2 grid cells each. Players then take turns taking shots at grid cells of their choice, trying to find and sink all of their opponent's ships before they lose all of their own. In this rendition, each side also places 8 sea mines before the main game starts. If a player places a ship on top of one of the computer's mines, it registers as an immediate hit, and hence also reveals the location of the ship to the computer. Conversely, the computer might have placed some of his ships in grid cells that the player mined, in turn giving them an edge. Mines also influence the game during the main shooting turns. Each side gets to take as many shots per turn as the number of enemy ships they already sank. If a shot hits a mine, however, the turn is immediately over and the opponent will continue shooting. Once either side has lost all of their ships, the player's performance is evaluated based on the number of shots taken, the number of hits, and the number of shots left after the final hit.