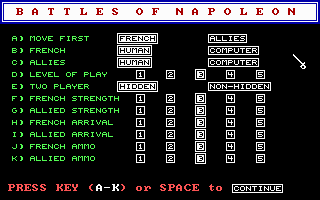 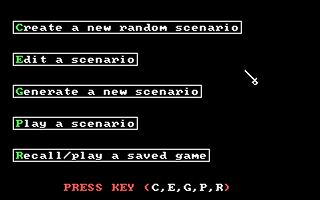 Battles of Napoleon is a historical wargame that lets you play either side in four of Napoleon's famous battles -- Auerstadt, Borodino, Quatre Bras, and the infamous Waterloo. Additionally, the game features a detailed scenario construction set that will allow you to design your own battles; everything from maps, to troop types, to weapon ranges and damage. Gameplay is turn-based, each turn consisting of different phases. During your turn, you can establish various objectives (map squares to occupy) for each unit or commander, move commanders between units, move a unit, change formation, and, of course, attack or retreat. The Borodino scenario is the smallest, and can be used as a "tutorial" of sorts before moving on to the larger, more complex scenarios. This is a game that fans can legitimately spend several hours on. The construction set allows, as you might expect, the creation of new scenarios for the game. In it, you will find the standard map and unit editors -- however, SSI allows you to make changes down to the weapon and unit type. This allows you to create scenarios for virtually any type of battle you can think of. As a silly example, it is possible to take the stock weapon "musket", change the damage and range, and rename it "laser rifle" -- you then have the makings of a futuristic battle on your hands. (Of course, you would need to modify just about everything else to complete such a scenario... but you get the idea.) The learning curve for this game is steep; it is probably not for the faint of heart. Anyone who enjoys getting shoulder-deep into battlefield strategy and tactics, though, will feel very comfortable with this game.