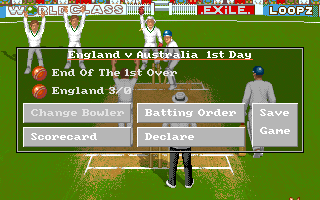 Cricket internationals are known as 'test' matches, but to many English and Australian players, most games are a mere test of ability to play in the Ashes, the fabled tours between the 2 countries taking place roughly every 18 months. Those who regard everything else as a time-filling exercise between these ancient duels between colonial power and one-time convict dumping ground will appreciate this release from Audiogenic. Battle For the Ashes was released at budget price, as a cut down version of the company's cricket game, released under various licenses worldwide offering only 5-day matches between England and Australia. Gameplay is unchanged, with batting involving precise timing and stroke selection, and bowling involving waggling to set speed or spin, with control over where the ball pitches.