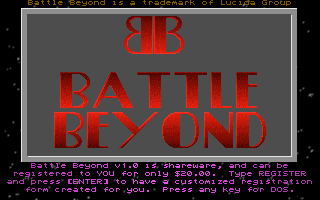 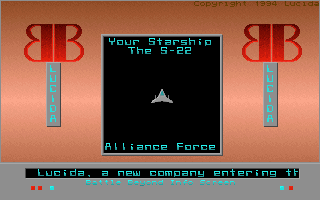 Battle Beyond is a single player, space, shooter game similar in concept to some of the old games like Star Trek and Stellar Trek. As with the earlier games the player is presented with a 4x4 grid which represents the universe, each cell has icons in it showing where the enemies and star bases are. In their space ship they must fly through each sector eliminating the enemy ships. The player has no shields so collision with an enemy, a mine, a black hole, a minor asteroid or being costs the player one of their four lives. Behind the game is a decent storyline of an Earth ravaged by an alien toxin that drove the survivors out into space where they are threatened by the infected who have rediscovered space travel. The game has sound, a save-game function, and is entirely keyboard controlled.