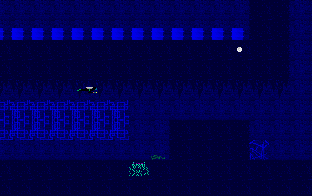 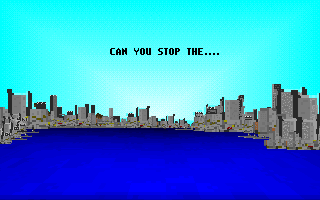 The player takes on the role of a secret agent, code-named Barracuda, on a mission to recover from the ocean floor the segments of a top-secret nuclear weapon. On the horizon looms an Iraqi salvage fleet, eager to secure the weapon before it falls into American hands. Barracuda is a hodgepodge of different game styles, perhaps best classed as an action-exploration sim. The player's mission begins on a map screen swarming with waterspouts. With incredible slowness the player moves a blip across the map in search of a sunken Iraqi ship. When the blip reaches its destination, the game switches to a side perspective as the player dives to the bottom of the Persian Gulf in a submarine, dodging or torpedoing sealife, all the while looking for the hulk of a transport ship. Once aboard the ship, the view changes again to a close-up exploration mode. Each ship is an enormous maze, often consisting of multiple maps, usually devoid of clear landmarks. The character (presumably the titular Barracuda) is an essentially helpless diver, avoiding environmental and zoological dangers -- tangled wire, sharks, jellyfish, deadly ping pong balls -- while searching for treasure. Die, and go back to the beginning of the maze. Find your treasure, and then slowly work your way back to the ship's entrance. It's realistic!