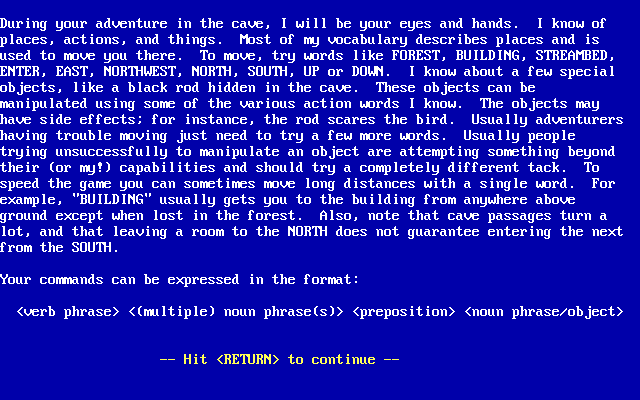 Bajoran Mercenary Adventure! is a single player, interactive fiction game that was developed with the Adventure Game Toolkit. The game describes itself thus You are a Bajoran mercenary contracted to find the 'orbs' that was stolen by the evil Cardassians. Your sources tell you that the orbs are kept in a cave, though it is rumored that some who enter are never seen again. Your mission is to retrieve as many orbs as possible and return (SAFELY!) As with most games of this genre commands are usually two word affairs, 'Examine Sign' 'Enter Building' and so on. Some common commands such as directions, up and down can be shortened to single keys n, s, w, e, u, & d. Similarly there are keywords such as 'Building' which will take the player to that location from anywhere in the game as long as they are above ground and not lost in the forest. The game has, naturally, no graphics at all but it does have a save game feature. When fully explored the player should have found 134 locations and should have scored 350 points.