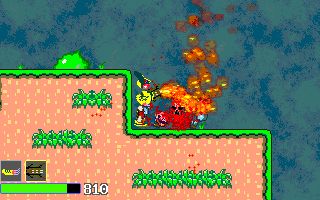 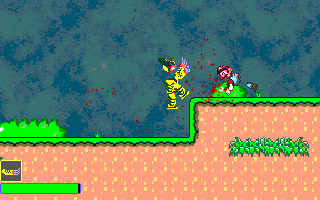 This flippant side-scrolling platformer states its "anti-remake" philosophy in no uncertain terms: starring as X-Men 's Wolverine, you get to hop, skip and jump across the pastoral landscape while savagely butchering such mainstays of video game lore as Mario, Sonic and Alex Kidd, who have somehow been cloned into a rampaging army bent on gory violence. They'll attempt to thwart you with their hand-to-hand combat skills; you can return the favor using your kicks and punches, or find more efficient means to deal with them - such as miniguns, bazookas and flame-throwers. You lose a life when your energy meter goes down to zero, either in combat or as a result of environmental hazards. All characters are procedurally animated in bouncy "ragdoll" fashion, which enables certain flexible acrobatic feats, as well as very messy dismemberment. The entire game takes up 32 KB of executable code; the full source is included (Turbo Pascal 7 with inline assembly), as well as the tools used to create it, including the level editor.