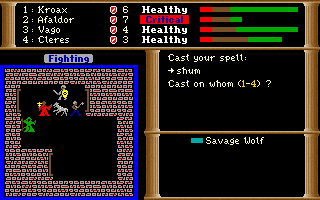 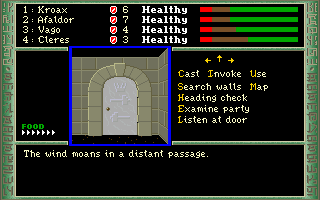 Four adventurers are sent by the Western Council to defeat out Uukrul, a great evil that once defeated the Ancients, thought to be destroyed, to possible invasion to the Western Lands. The last party sent by the council was lead by Mara, and it has been 18 months since they have sent word. The council assumes the worst. Now these adventurers must infiltrate the underground city of Eriosthe, continue to the eastern end of Eriosthe, the heart of Uukrul's stronghold, and destroy the evil once and for all. The Dark Heart of Uukrul is a first person perspective, turned-based role-playing game (RPG), where the player takes control of a party of four specifically classed adventurers: a fighter, a paladin, a priest, and a magician. The player may use a pre-generated party or create an entirely new party. The adventure takes place in the immense underground city of Eriosthe, which consists of twisting caverns and dangerous monsters. Adventurers may however, take refuge in sanctuaries - safe havens created by the Ancients to provide safe resting, storing items, and access to teleportation portals. Characters sufficiently experienced will automatically be leveled-up here. Sanctuaries also act as a progress indicator as areas accessed after each sanctuary introduce stronger monsters and tougher puzzles. These safe havens may only be accessed after answering the puzzle by consulting the soul amulets (read=copy protection). Aside from sanctuaries, the only other gathering place for adventurers is the marketplace. The marketplace is the only area in the whole of Eriosthe which provides services such as a shop to purchase and sell weapons, items and food, a forge to repair weapons, a hospice to heal wounds and cure diseases, a mausoleum where dead characters can resurrected or laid to rest (removing dead members), a guild to meet and replace (if needed) dead companions with new recruits and a teleportation portal, which links to other portals (such as those in sanctuaries) and other areas. The marketplace also links to temples and the Magic Circle, which allows priest and magician characters to advance (by obtaining rings of power). There are also rumors that a sage provides services in identifying objects somewhere deeper in the eastern tunnels... Adventuring in Eriosthe consists of exploring its caverns and defeating randomly encountered (or pre-set) monsters. An auto-map feature is also available, as well as a directional compass to help guide the way. Certain encounters, such as puzzles may prompt the player to choose various options in handling the situation, each choice with a possible different outcome. Turn-based combat occurs automatically when the party meets opponents while adventuring (indicated by a sudden picture of the opponent). Fighters and paladins take the offensive role, while priests and magicians (usually) take the support role of casting spells, summoning elementals, and invoking the gods. Surviving combat may uncover money and items. The Dark Heart of Uukrul has no sound or music.