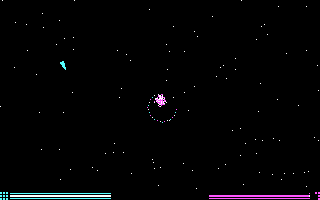 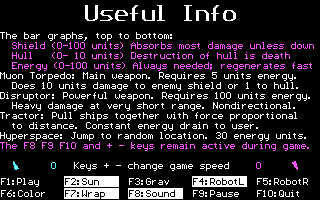 Another variation on the classic Spacewar! style of interstellar combat, played against a human player or the computer: two triangular spacecraft duke it out for survival, with the simple premise of kill-or-be-killed. The ships roam freely across the arena, using rotate and thrust controls to manipulate their movement; edge wrap-around can be toggled on or off, and an optional gravity well may be placed at the center, with or without a sun (crashing into one is highly ill-advised). Victory is achieved by destroying the opponent ship's hull. Both players are equipped with a shield, which protects the hull until it can be taken down, and a regenerating energy storage which is depleted by thrusting, firing, or using a special ability: the powerful disruptor (which launches a sphere of heavy damage at short range), the tractor beam (which pulls the two ships together) or the hyperspace teleporter (which displaces the ship to a random location). Taking heavy damage can disrupt or disable some of the ship's controls, so fly safe.