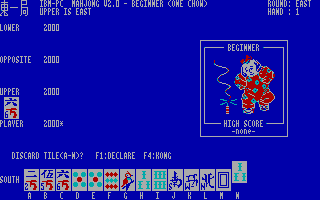 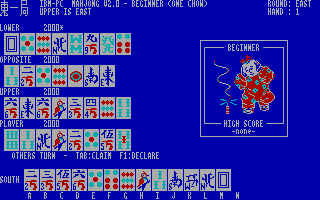 A PC version of the traditional Chinese tile game Mahjong, for one human player contending against three computer-controlled rivals. The game is similar to rummy: each player starts with an assortment of 14 playing tiles - one tile may be discarded per turn, and a new one obtained. Tiles discarded by the other players may be claimed in order to complete an identical set, or a consecutive run of the same suit. To win, a player must declare mahjong by filling out four complete sets and a pair. Certain difficult-to-obtain hands are awarded with a higher score; three variations on the rules and three skill levels are available, and the game keeps track of the best scores for each.