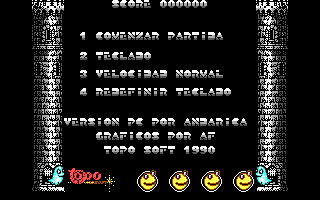 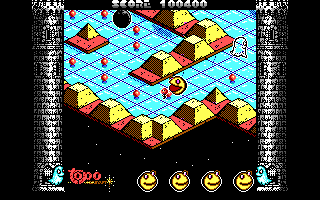 Peace had arrived finally at "Cocovillage" thanks to the good work made by Mad Mix, who had become the worthy successor of his grandfather. But the nightmare had still not finished, because a few miles away, in the town of his cousin Ope, "Cococastle" (a place crowned by a phantasmagoric Castle), it was happening a strange phenomena. All the indications made think that a "coco", survivor of "Cocovillage", had converted the Castle into his dwelling, establishing in addition a maleficent alliance with the sinister inhabitants from that place. The terror had seized the inhabitants of "Cococastle", and only Mad can give back the tranquillity to the pacific inhabitants of this village. The game consists in eating all the "coconuts" (small ball species that are dispersed through all the Castle) which appear at every moment. Once you have finished with all the coconuts of the level you will pass to the following stay of the Castle of the Ghosts, this is the mechanic until you have been able to explore all its corners. However, you shouldn't care only in eating all the "coconuts", but in addition you will have to be very kind trying to not collide with any of the inhabitants of the terrific Castle, as well as to avoid the different traps (or using them in your own benefit) while taking helpful -some with really curious effects- objects.