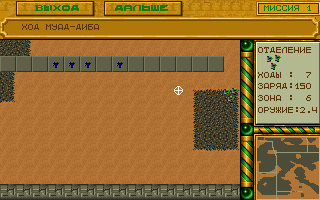 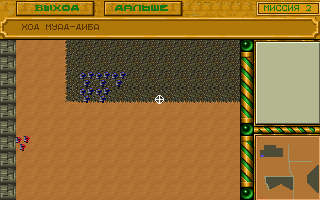 Dune III is a fan-made game set in the Dune universe created by Frank Herbert. The game uses graphics from Westwood Studios' Dune II, however it is not a real-time strategy game, but a turn-based tactics game instead. The plot in Dune III is loosely based on Frank Herbert's books, combining elements from both earlier and later instalments in the Dune Chronicles. As the Bashar in the service of Emperor Leto Atreides, the player must defend the planet Rakis, which is the only source of spice melange in the universe, from attacks by the Ixians, the Tleilaxu and the people from the Scattering who wish to occupy Rakis and take control of the spice production. The campaign consists of a variety of missions, both defensive and offensive, but usually the primary objective is to completely eliminate enemy forces with the limited number of units that are provided at the start of each mission. Units have a limited number of movement points that can be spent each turn on movement, attacks, or both. There are three terrain types - sand, rocks and roads - and each has a different movement cost in points, with roads being the fastest way of travel, and sand the slowest. Unit attack strength greatly depends on the number of available movement points, which means that a unit that had previously moved in a turn will deal less damage to its target than a stationary unit that attacks right away at the start of the turn. The game does not support multiplayer mode, and only allows to save the player's progress upon exit. A certain element of surprise is added by the random placement of enemy units at the start of each mission; map terrain, however, remains the same each time.