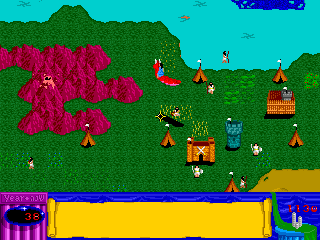 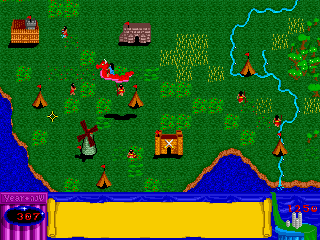 The verdant archipelago of the Dragon Isles: home to a prosperous nation led by an emperor, enjoying a thriving, peaceful culture. Or so it did, until a vast hostile fleet invaded from across the ocean, devastated the lands and reduced the once-flourishing civilization to ruins. Only tattered bands of survivors managed to escape with their lives, and the conquering enemy held sway over the islands for decades. Until one day a leader rose, assembled the scattered remnants of his people, and set sail back to the Dragon Isles to try and retake their ancestral home. You command this small group of warriors and settlers, freshly landed on the first island, and must build up your forces and launch the reconquest. As in most real-time strategy games, your efforts will be centered on gathering resources, creating units, repelling enemy attacks, and constructing buildings to strengthen your village base and enhance your military abilities. Once all enemy forces and installations are wiped out, the island is yours, and your brave company travels on to the next one to open a new campaign. Unlike the common type of top-down RTS game, the player is not merely a disembodied, invisible commander: your character overlooks the action from the back of a flying dragon, and the screen scrolls along with your movements. There is no "fog of war", and the whole map is visible from the get-go, including the enemy-controlled areas, but there is a limiting factor: over hostile territory you may encounter the enemy general, who rides yet another flying dragon and can banish you back to your base after a short scuffle. Resource gathering is carried out by the peasants, who till the land, harvest food and materials, and produce the necessary upkeep to maintain your army and your various installations. Extra profits can be earned by constructing windmills or exploiting the islands' natural resources (such as oil). To build up a capable reconquering army, it will be necessary to build barracks for training various types of units - from knights and archers to cavalry and war elephants. As the game progresses, you will be able to construct temples and monasteries to commission monks, castles that produce forces on a large scale, and even start a Secret Service to train spies, and - yes - ninjas(!). Dragon Isles can be played either in Hebrew or English.