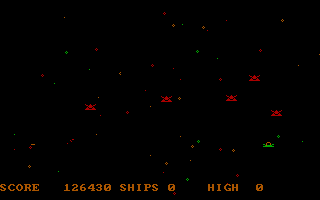 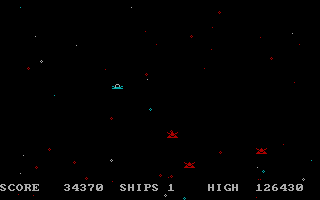 A space shooter reminiscent of Computer Space : the player controls a starship and is free to move about a wrap-around playing field, using a physically realistic scheme of inertial thrust, while pursued by formations of enemy spacecraft. Thrust can be applied in any direction using the cursor keys, but ships may only fire to the left or right - the player is equipped with a long-range projectile, while the enemies sport short-range laser beams. When an enemy ship is destroyed, a new one takes its place; formations may break up, regroup and strengthen in numbers as the game progresses. Raising the skill level cranks up the game speed and provides for increasingly hectic action.