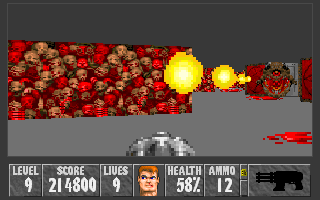 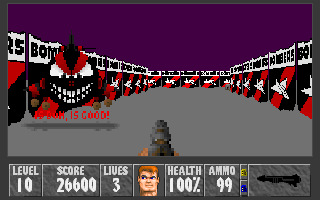 Wolfendoom is a standalone modification of the first-person shooter Wolfenstein 3D. It is set in the Doom universe. The protagonist is "B.J. Blazkowicz Jnr", a military consultant for the UAC corporation, who finds himself involved into a top-secret plot. It seems that experiments at UAC resulted in the opening of six portals to the "Doom Dimension", and now B.J. must head through each gate to close it from the inside before the demonic inhabitants invade Earth. The gameplay remains similar to Wolfenstein 3D, but with a Doom theme. Each of the six episodes begins in an UAC base, where the player makes his way to the portal, then fights his way through the monsters of the gothic-styled Doom Dimension. The player collects keycards to open doors, skulls for score, and more powerful weapons: a plasma rifle and a chaingun. The Windows version makes use of the SDL engine, allowing higher screen resolution.