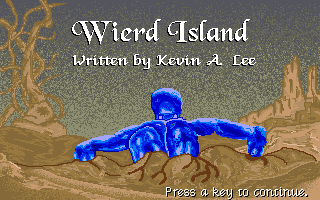 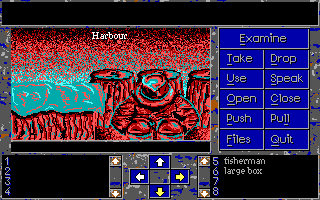 Weird Island is a single player, shareware, adventure game with graphics. The game has optional sound, can be played either via the keyboard, mouse or by a keyboard mouse combination, and supports either VGA, EGA, or MCGA graphics. The story behind the game is that many centuries ago five galley slaves washed up on a tropical island, one of whom was your ancestor. Every one hundred years ownership of the island passes from one family of descendants to the next and it's your family's turn meaning you now own an island paradise. The good news was relayed by a firm of solicitors because the previous owner who should have imparted the good news has disappeared. The game screen consists of seven small windows one for each of the following, conversation responses, the picture, the games commands, sentence construction, movement, an inventory window and an object window. To get something done the player presses the appropriate command key and then the appropriate number in the inventory, or the clicks relevant boxes on screen. So pressing 'S' puts the verb 'Talk to' into the sentence window, pressing the appropriate key for a character will put their name into the sentence window and pressing ENTER will initiate the conversation. Alternatively the player can construct a sentence by clicking on the appropriate command and object.