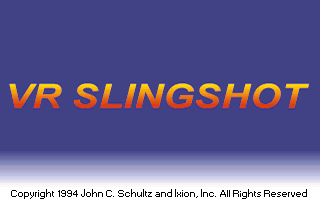 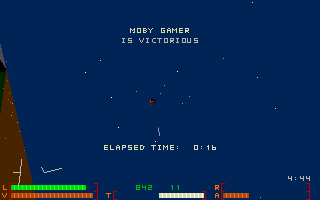 VR Slingshot is a game that was designed for use with Stereo 3D LCD Shutter Glasses but which can be played in a normal DOS window. It claims to be"... the first game to combine: 1. Real-time computational fluid dynamics airflow simulation, 2. Real-time physics-based interaction, 3. Advanced flying and driving simulation, 4. Stereoscopic 3D graphics, 3D sound" There are two games available Energy Duel and Cyberball and in both games the player flies a spaceship, a vipercraft. In Energy Duel the player attempts to shoot the their opponent's vipercraft. Cyberball is played on a football like arena and the object is to capture a ball and fly it through your goal to score points. Games can be played against the computer or against another player over either a modem or a direct link. The game has four levels of difficulty and four practice levels. It was released as shareware which just had the Novice level of Energy Duel, Cyberball was present but in demo mode only. VR-Slingshot has many keyboard controls but the craft is flown via the joystick.