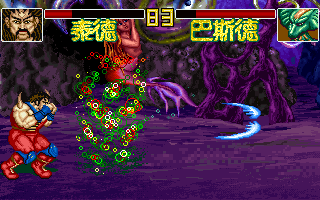 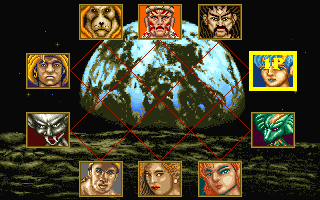 This one-on-one fighting game pits ten contestants against one another in classic tournament style, all vying for the truly lofty title of 'Universe Hero'. This grandiosity is not without explanation: it’s the end of the 21st century, and the galaxy is just settling down after a long series of bloody interstellar wars. The powers-that-be attempt to secure peace by finding another outlet for all that pent-up bloodthirst and putting those violent impulses to better use. As a formal, ritual replacement for war, an annual fighting tournament is announced - allowing the most capable warriors from every known planet to challenge one another for the ultimate honor. Despite the futuristic setting and cosmic scale, the combatants are all generally humanoid, although their fighting styles and move repertoires are appropriately varied; some are more exotic in form, while others appear decidedly human. In keeping with genre conventions, the fighters all have their more mundane chops as well as special moves (using ranged attacks, melee weapons, and other less conventional means), all executed using directional controls plus kick and punch buttons. Besides the single-player tournament mode, which culminates in the customary boss battles, two players can battle each other - either on the same machine or via modem.