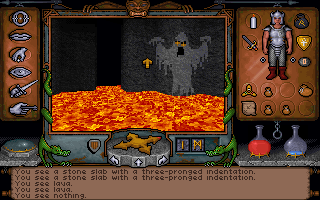 After having brought peace to Britannia during his previous journey there, the Avatar returns to our world. However, he is haunted by ghostly dreams that warn him of a great danger in Britannia. The Avatar decides to travel there once again. Upon his arrival, he witnesses the kidnapping of Baron Almric's daughter. Found guilty of the crime, the Avatar is thrown into the Great Stygian Abyss with the choice of either finding the girl or rotting in the dungeon. On his journey he will have to get along with the many inhabitants of the dungeon, who are survivors of a failed colony, and eventually find out that there's much more to this kidnapping than meets the eye. Ultima Underworld: The Stygian Abyss is commonly considered the first role-playing game with fluid first-person movement in a real 3D environment. Unlike earlier first-person RPGs such as Dungeon Master or Eye of the Beholder, the player can move in every direction and the graphics are updated continually. The player is also able to look up and down with the press of a key, jump, and swim. The dungeon is not made entirely of corridors and rooms arranged in a rectangular fashion, but has a lot of variety: slopes, stairs, bridges, underground rivers, and more. The game's combat system is action-oriented. The player has to draw his weapon, aim at his opponent, and hold the cursor over the game screen to inflict damage; the longer the player holds it, the stronger is the attack. Some weapons have different types of attacks, depending on where the cursor is held: for example, jabs are executed when the cursor is near the bottom of the screen, while slashes are performed with the cursor in the middle. In the beginning of the game, the player chooses the gender, the class, and the initial skills for the Avatar. Skills include various weapon proficiencies, lockpicking, bartering, and others. They can be increased by reciting mantras at special shrines after having accumulated a sufficient amount of experience points. Leveling up also increases the Avatar's hit points and mana. The magic system is based on runes that can be found in the Abyss. If combined in the right order, they produce a magical effect. As the Abyss is populated by more than just monsters, there are various conversations the Avatar can conduct with non-playable characters. The player can also make choices regarding the Avatar's behavior towards these characters. Game progression is largely non-linear: the player is able to explore most of the Abyss in any order, though several specific tasks must be accomplished in order to complete the story. An auto-map displays all the locations the player has explored previously, and also allows the player to make notes on it.