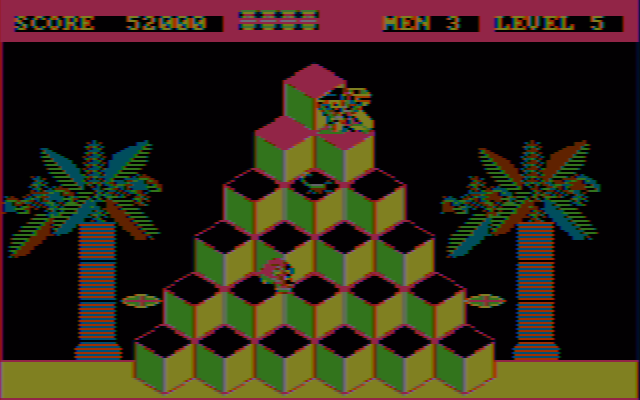 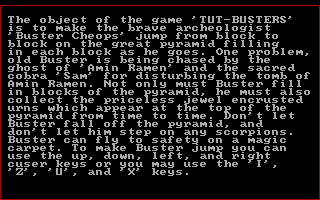 A take on the Q*Bert formula with an ancient Egyptian theme. The famous archaeologist Buster Cheops is treasure-hunting in the ancient pyramid of Amin Ramen, trying to recover some antique urns; he has to explore every block on the pyramid by jumping on it, which changes its color. Unfortunately, the tomb's current residents aren't on board with Buster's scientific curiosity. He finds himself chased around by the jumping skull of Amin Ramen himself, a cobra (named Sam), and a scorpion (whom we do not know on a first-name basis). To complete a level, Buster has to color all the pyramid blocks *and* collect the urn that appears at the top now and then. Running into enemies (or falling off the pyramid) will kill him, although a new life is given at 50,000 points. Some of the levels have a pair of magic carpets, which can carry him safely back to the top. The three skill levels (beginner, expert, master) adjust the speed of the enemies for a more varied challenge.