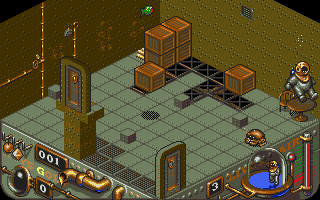 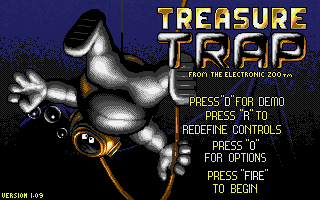 In 1829 The Esmerelda, a cargo ship carrying gold, sinks to the bottom of the ocean. In 1927 a treasure hunter called Howard Kelp dons a diving suit and searches for the bullion in the wreck. Treasure Trap is an isometric action game similar to Head Over Heels, but less abstract in its theme. The player guides the diver in a series of rooms (100 total) where the main goal is to collect gold. The main hazard encountered is the sea life that occupied the vacant ship. The character has no weapons, but carries a limited amount of "smart fishes", trained piranhas that attack and destroy all the enemies in the room. Since the player starts with 2 fishes and only receives a new one at each 80 gold bars collected, most of the time the enemies have to be avoided by staying away or jumping over them. Stacking boxes and other objects stops the fauna from getting to the character (and also allows access to high places). There's an air gauge that is constantly depleting at the bottom-right of the screen. It can be filled with the compressed air tanks scattered in some rooms. Some doors require geometric-shaped keys. These can be collected and stored in three slots at the bottom-left of the screen. The game allows saving at each 50 gold collected.