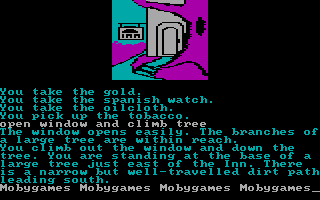 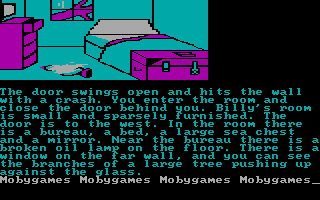 Jim Hawkins is a young boy working on "Admiral Benbow", his parent's inn. One day a sea captain named Billy Bones takes a room at the inn and stays for several months. A blind man called Pew arrives and shows something to Billy that gives him a heart attack. Jim witnesses everything and runs to aid the captain, who tells him about his sea chest and his relationship with Captain Flint, a famous pirate. After he dies Jim grabs the key dangling from the corpse and opens the dead captain's chest to collect the last payment. He finds a packet inside, and decides to take it to two aristocratic acquaintances of his, Dr. Livesey and Squire John Trelawney. They discover a diary and a treasure map, and decide to travel to the island in search of the booty. Treasure Island is a text adventure, an adaptation of the classic 1883 novel of the same name by Robert Louis Stevenson. Unlike the book, the game is written in a second-person perspective. Otherwise, it follows the original plot closely: the player assumes the role of Jim Hawkins, and has to perform the same actions as the character in the novel. This leads to a more claustrophobic design, as players without knowledge of the book have to guess what to do next. To help alleviate that problem, other characters act as some sort of built-in hint system. The player can ask them about anything and they will provide clues when these are available. The parser accepts most of Infocom 's standard features like pronouns and chain commands.