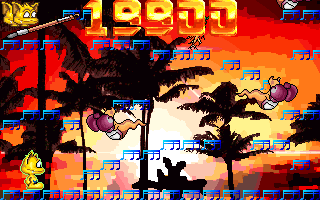 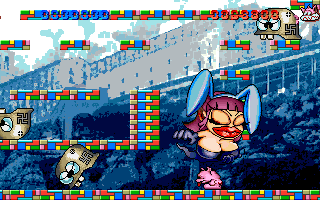 Tonko is a Korean-made platform game that consists of very small (almost single-screen) stages. Each stage is a platform structure populated by monsters. The player controls a cute yellow goblin who must defeat these monsters, traveling through stages with real-world geographical backgrounds. Among the enemies are Nazi ghosts, vampires, beer mugs, American football helmets, crazy fish, and other unorthodox creatures. Tonko can jump and whack enemies on the head with his hammer, which can be upgraded with various power-ups (such as electricity charge) scattered around the stages. If an enemy touches Tonko, he loses a life; the game is over when Tonko has no lives left.