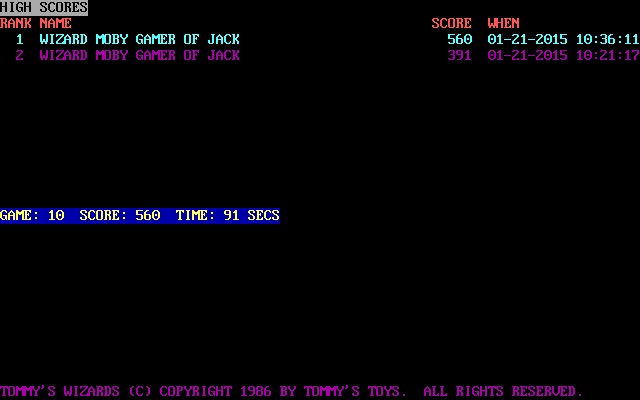 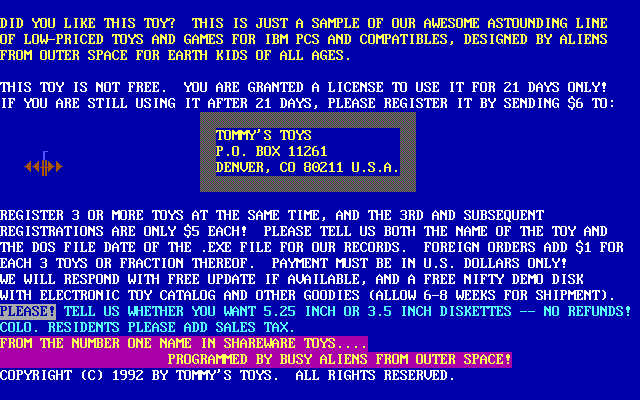 Tommy's Wizards is a single player, shareware, intriguing piece of whimsy. This is one of those games that doesn't explain itself and to is left to the player to decide whether it's a game a time filling piece of nonsense or whether it's one of Tommy's joke programs. Being an alien and thus knowing about such things, Tommy tells us that this is not really a game, it is the universal test for magic and Extra Sensory Perception. After entering their name and their trump card the game begins. It is a contest between the player on the left and Tommy's wizards on the right. The object of the game is to move the magical force field/power bar all the way over to the right thus overpowering the wizards, the puzzle is how to do it. The documentation suggests that the player may win by staring at the screen and moving the force field by sheer willpower, by making appropriate mystic gestures or by saying certain magic slogans. Alternatively magic words can be typed into the computer and, during the struggle, some words do appear at the bottom of the screen, there's often a 3x3 matrix of numbers in the top right corner of the screen too, but whether entering information from either of these helps or hinders the player is not explained. There is a high score table which records the highest running score after each round. As with most of Tommy's games it uses character graphics and is entirely keyboard controlled. It has basic sound effects and command line switches to start the game with sound turned off and to force either a colour or monochrome display.