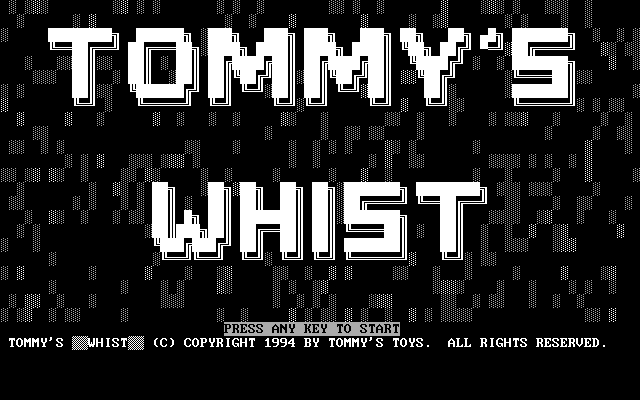 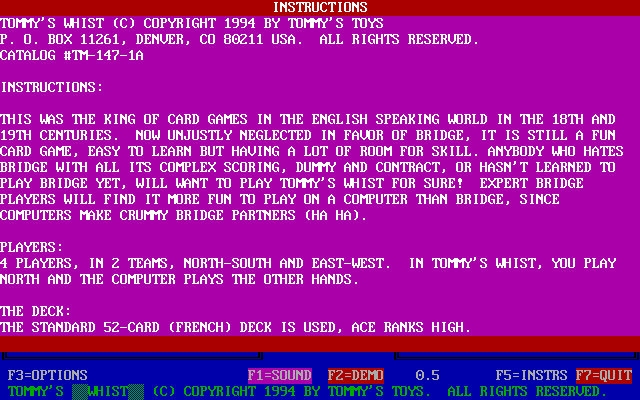 Tommy's Whist is a shareware, single-player version of partnership whist. This is a game for four players, two teams of two, the player plays as the north chair and the computer plays the other three hands. This is a trick taking game that is played with a standard fifty-two card deck. A match consists of a series of games. Any partnership scoring more than seven tricks scores game points for each additional trick and winning a game scores the winning pair match points. The game has many options that can be used to customise game play, these include: A game ends when one team scored xx game points where xx is between five and ninety-nine A match ends when a partnership has scored cored xx match points where xx is between eight and nine thousand, nine hundred and ninety-nine Partnerships that win a game will score honours points if they have three of four of the Ace, King, Queen and Jack of the trump suit. Honours points can be disabled Trumps can be determined by the last card dealt, selected randomly by the computer, announced by the first player to play a card, or the game can be played without trumps There's an option to replay a hand The game is entirely keyboard controlled. It has basic sound effects, a demo mode and command line switches to start the game with sound turned off and to force either a colour or monochrome display.