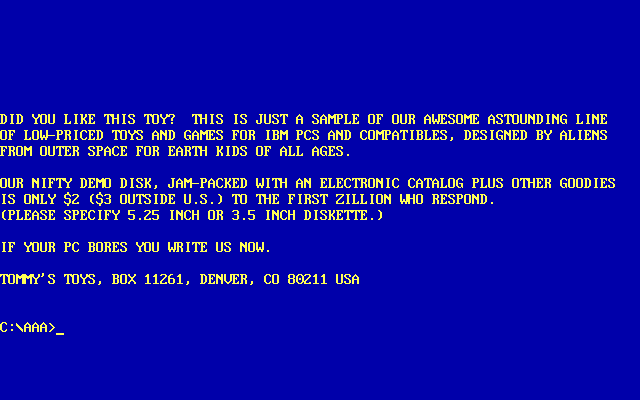 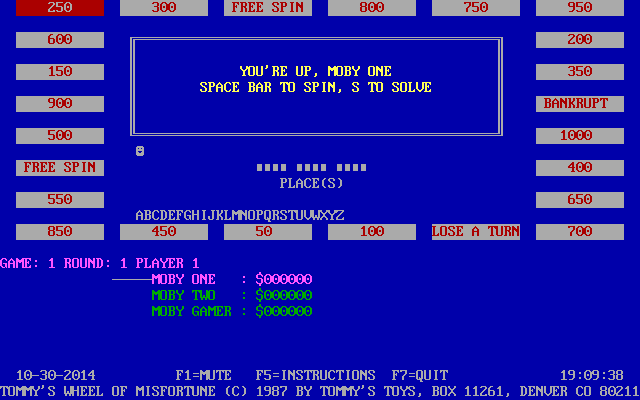 Tommy's Wheel of Misfortune is a wheel of fortune, shareware game. It can be played by one player on their own or by a group of two to six players. The game is based on the format of the famous television game. The game consists of between three and six, depending on the number of players, plus a bonus round. In each round the player(s) are presented with words which can be a phrase, a name or a thing. All the letters are blanked out and they take turns in guessing which letters could be part of the hidden word(s). Within their turn a player may spin the wheel to guess a consonant, buy a vowel or guess the word. If the player guesses a consonant correctly then their score is increased by the number of times that letter occurs multiplied by the amount shown on the wheel. At the end of the regular rounds there is a bonus round where the player with the highest score chooses five consonants and a vowel at which point they have twenty seconds to guess the phrase for a grand prize of twenty-five thousand dollars. The game has a number of variations to standard play; 'Hurry Up' mode where the computer spins the wheel to determine the value of the letters and all players take turns to guess a single letter without spinning the wheel at their turn. Cheaters Mode. This displays the letters that haven't been guessed beneath the target phrase. F8 toggles this mode on/off and the game starts in this mode because, as the documentation says, '... most people cheat'. Wheel Of Fortune mode. This option changes the game to a more conventional, softer, game. The main differences being that if a player guesses incorrectly their earnings are not reduced and there is a house minimum of two hundred dollars per round. There are also command line switches to start the game without sound, force a colour display and another to force a monochrome display. The game contains over twelve hundred phrases and a further twelve thousand could be purchased from the developer, these came with over a dozen variations on the standard game together with an editor so that player(s) could create their own phrase data bases.