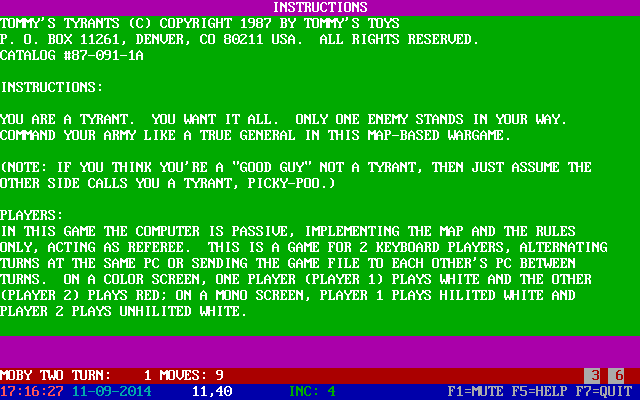 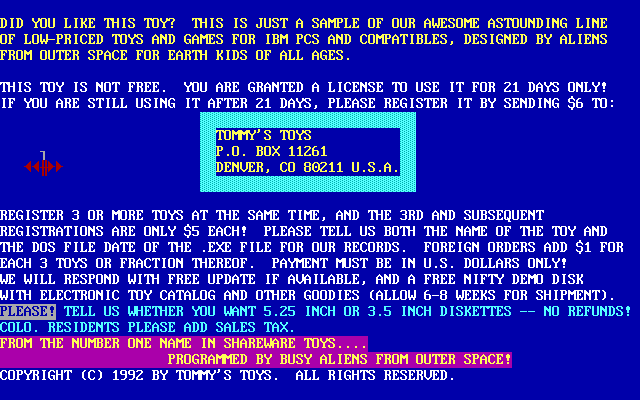 Tommy's Tyrants is a shareware wargame for two people. There is no computer opponent in this game, all the CPU does is keep score and referee. It is played on a world map that is 127x127 cells wide but does not use the hexagonal grid system that is commonplace in this genre. Both players start with the same sized forces but captured cities can build more airships, and ships as well as train troops. Each cell may hold land(shaded brown), sea (shaded blue), a troop unit, an air ship, a sea ship or a city. Cities can be held by either player in which case they are represented by a letter or they can be represented by a white square with a hole in it to show they are free. A cell holding a city can also hold an unlimited number of airships and troop units. Troop movement is by governed by rolling dice. For each player's turn the computer rolls the dice, the player then nominates a unit by selecting it with the cursor and then selecting the destination cell in the same way. The game uses a reduced rule set compared to heavyweight wargames, for example troops that are adjacent to each other will engage automatically and they each get to fire one shot with a one in thirty-two chance of success with no variation based on experience, weaponry, armour etc. Similar rules, but different odds, govern the interaction between all possible combinations of troops, airships, and ships. A game ends when one player has all the cities and more troops than the other, or has all the troops, or when the number of moves made exceeds thirty-two thousand seven hundred and sixty seven. The game is entirely keyboard controlled. It has basic sound effects and command line switches to start the game with sound turned off and to force either a colour or monochrome display.