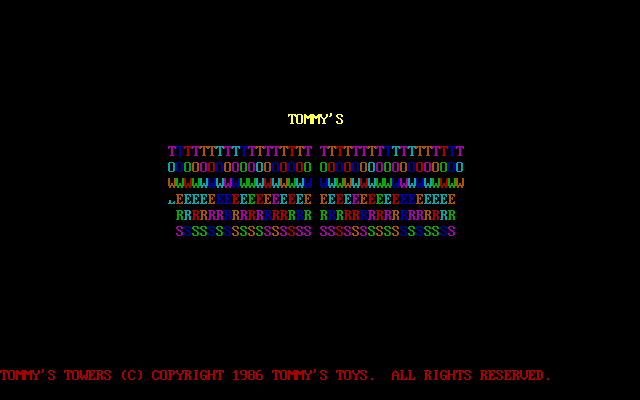 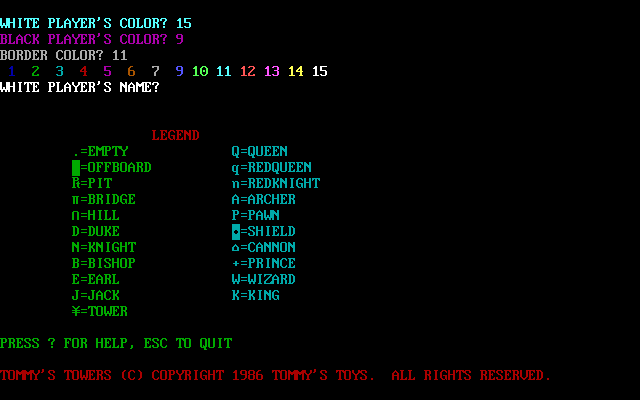 Tommy's Towers is a single player, shareware game that is a combination of chess and wargaming. The basic idea is that here on earth we play chess on an 8x8 board with sixteen pieces on each side. Tommy is an alien and where he comes from the game is played on a 20x50 board with three hundred pieces on each side, this apparently is a more realistic battle simulation. As with chess there are rules governing the movement of each piece, what each piece may take and how it is taken. Alien pieces are used in addition to traditional earth pieces, the full set comprising pawns, shields, kings, towers, bishops, queens, jacks, dukes, earls, knights archers, princes, princesses, canon, red queens, red knights, and wizards. Towers are the most powerful pieces on the board, hence the name of the game, they have an unlimited range of movement and can capture any other piece. There are also bridges, pits and hills, these are 'passive pieces' and while they affect the actions of other pieces, a bridge can only be crossed in the direction it is laid and a canon cannot shoot through a hill, they themselves do not capture other pieces. As with most of Tommy's games it uses character graphics and is entirely keyboard controlled. It has basic sound effects and command line switches to start the game with sound turned off and to force either a colour or monochrome display. In addition game files can be saved, edited, and there's a backstep/undo function