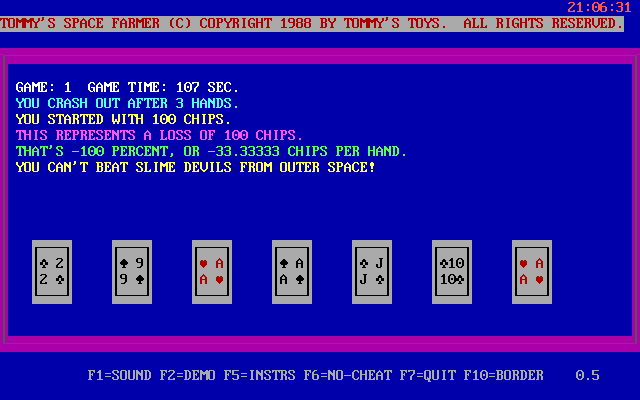 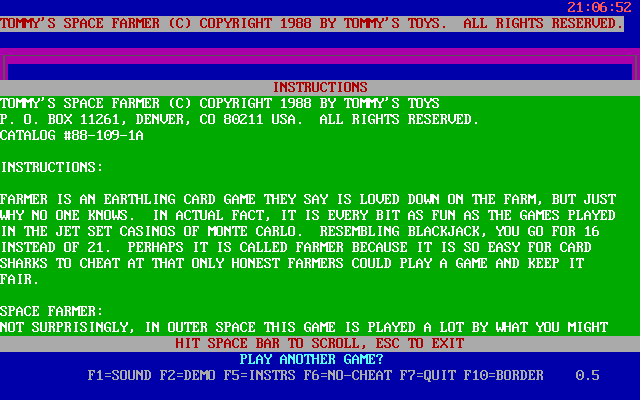 Tommy's Space Farmer is a shareware card game in which the player plays against six AI opponents, the Earth game this is based on is for two to eight players but this is the version played in space by aliens. The game is played with a standard deck of cards from which all the eights and three of the four sixes have been removed, the six of hearts remains. The game plays a bit like blackjack with the aim being to draw cards to the value of sixteen. It is played for chips and the pot is called 'The Farm' and the dealer is known as 'The Farmer'. At the end of a round the player's cards are revealed. Anyone with a spot count of sixteen wins, if there is a tie then there are rules to decide who should take the farm. There are additional rules that award chips in special circumstances, for example, any player whose hand count exceeds sixteen must pay 'The Farmer'. It's a sad fact that, in space where this game is played by aliens, not all aliens are honest and some of them cheat. To replicate the fun that this can bring to the game there is an optional CHEAT function. When enabled the AI opponents may cheat and the player can challenge them. If the challenge is successful the AI player is zapped and the remaining players share it's stack. However the player challenges someone when they were not cheating then they get zapped and the game ends. The game is entirely keyboard controlled. It has basic sound effects and command line switches to start the game with sound turned off and to force either a colour or monochrome display.