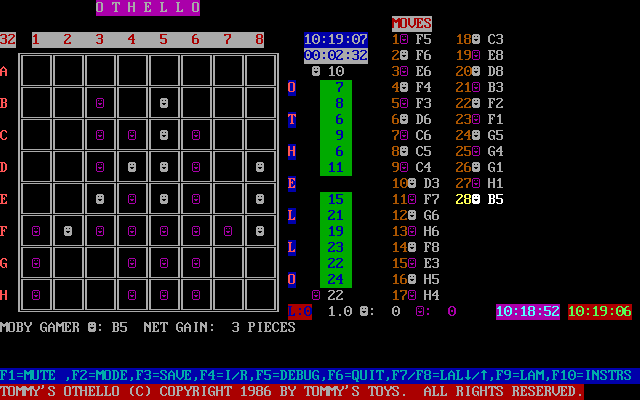 Tommy's Othello is a shareware implementation of the classic board game of Reversi, also known as Othello. The game is played on a standard 8x8 board with one player using black pieces and the other using white. The payer's objective is to fill the board with as many pieces of their colour as possible. By trapping the opponents pieces in between two of their own, they turn into their colour. This implementation can be played three ways, if no human players take part the game plays both sides, if one human player takes part then they play against the computer and finally two human players can play against each other. This implementation has a 'complete board management system' which means games can be saved and replayed, plus there's a backstep or undo function. The strength of the computer opponent can be varied, it can be configured to 'look' up to nine moves ahead. There is a high score function and, as with most of Tommy's games it uses character graphics and is entirely keyboard controlled. It has basic sound effects and command line switches to start the game with sound turned off and to force either a colour or monochrome display