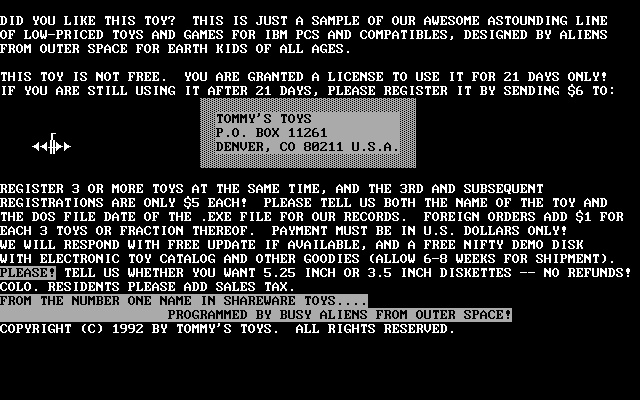 Tommy's Old Maid is a single player, shareware implementation of the children's card game. To play Old Maid requires two players so in this implementation the player plays against the computer. The game is played with a standard deck of fifty two cards from which one queen has been removed. When the cards are dealt they are shared between the players one of whom gets twenty-five cards and the other gets twenty-six. All cards are dealt face up and players discard the all pairs from their hand. The cards are turned face down and shuffled so that no-one knows which card is which. At this point both players will have a single card of each number and one player will have the odd queen. Players take turns to play a card from their opponent's hand. If it matches a card from their own, which it should, hand then both cards are discarded, if they draw the odd queen then that card is taken into their hand and their turn is over. Play continues until all cards in one hand have been exhausted, the hand which is left holding the odd queen wins. This implementation features two game modes, the standard which uses a full deck of cards and the short mode which uses just one suit each As with most of Tommy's games it uses character graphics and is entirely keyboard controlled. It has basic sound effects and command line switches to start the game with sound turned off and to force either a colour or monochrome display