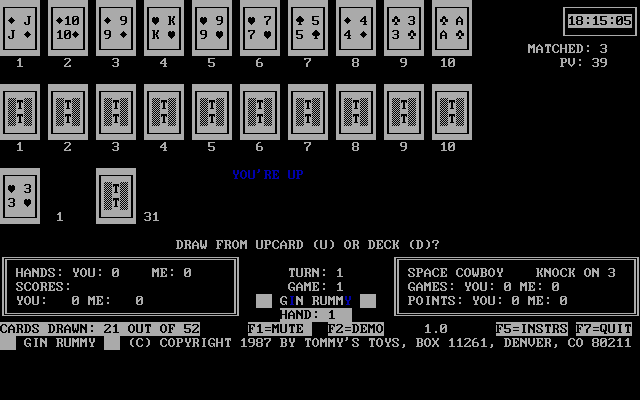 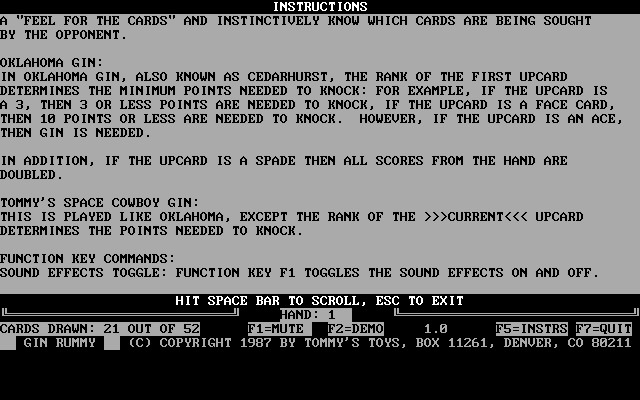 Tommy's Gin Rummy is a single-player card game in which the player plays against the computer. Gin Rummy is a popular card came in which the player's are dealt ten cards each. Put simply the object of the game is to make sets of cards of the same rank or runs of cards in the same suit. Players alternately take a new card from either the deck or the discard pile into their hand. If it does not fit it is discarded, if it improves the hand it is retained and another card is discarded. The player who is able to dispose of all of their cards wins the hand and scores points, the first to score a predetermined number of points wins the game. In addition to the Standard game this implementation has two optional Gin Rummy variations, Oklahoma also known as Cedarhurst, and Tommy's Space Cowboy Gin both of which change the points needed to 'knock'. The game is entirely keyboard controlled, it has some basic sound effects and a demo mode in which the game plays itself. It has command line switches to start with the sound off, force monochrome mode, and another to force colour mode.