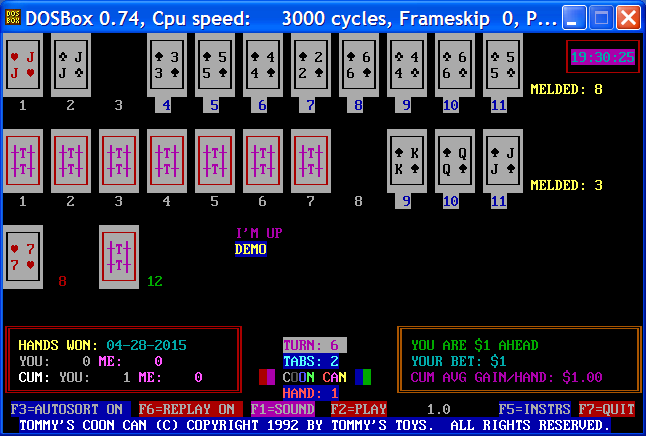 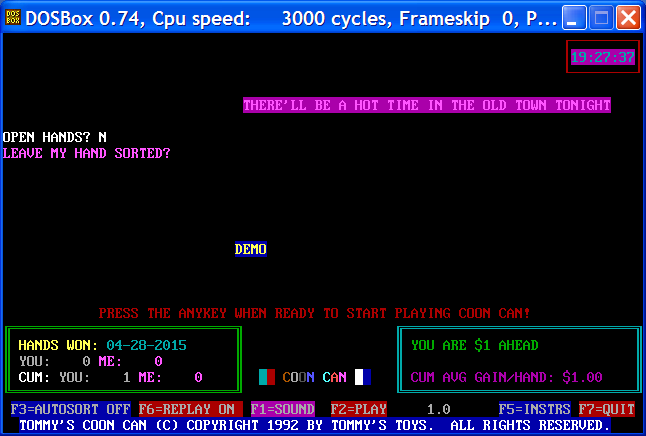 Tommy's Coon Can is a card game for one person against the computer, based on a card game considered an precursor of Rummy. The game is played with a 40-card deck, with the 8-10 cards removed. The original 'Coon Can' card game was described in the mid 19th century, and can have 2-6 players, though here on the PC it's only two, you and the computer. The name 'Coon Can' is thought to be a corruption of 'Conquian', though the actual game origins is disputed. Only the keyboard and function keys are used for playing, and there are some tunes that plays on the speaker during game play (there is a mute function). The rules of the game are explained in-game, and a demo game can be activated where the computer plays against itself. In short, the dealer hands out ten cards to each player, and then puts the rest of the cards in a draw deck, backside up. One card is placed face up in a discard pile, and the players take turns in picking a card from either the discard pile or the draw deck, in order to make melds of three or more cards in sequences or matching cards from their hand, until one of the player has placed all his cards in melds. Next deal the role of dealer goes to the next player, and the process is repeated. Points are counted of face valued of cards 1-7, Kn-Q-K cards are worth ten points each. The betting stake at the start of the game is 1-999 out of a maximum of 9999.