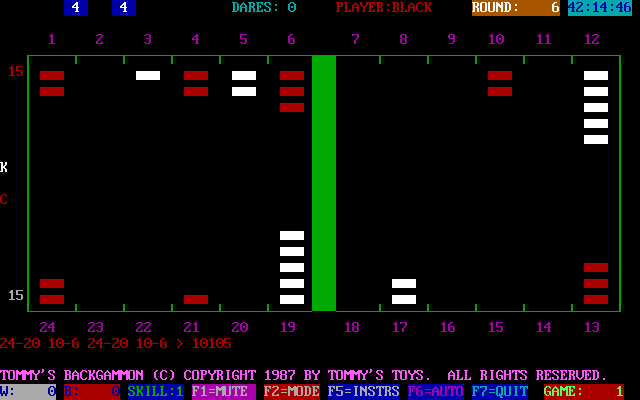 Tommy's Backgammon is a single-player shareware game. As with most of Tommy's games it uses character graphics and is entirely keyboard controlled. It has basic sound effects and command line switches to start the game with sound turned off and to force either a colour or monochrome display. This game has nine skill levels, and a choice of Dutch or Standard backgammon (in Dutch backgammon all the pieces start on the Bar). It allows a player to pass their turn and has options for Dares and Take-Back's. All the stations are numbered, the white tokens move clockwise around the board from station one to twenty-four, the black/red tokens move in the opposite direction from station twenty-four to one. Moves are made by entering the start and end positions for example 17-22 to move a white token five spaces or 17-12 to move a black token five spaces. The game also accepts 17+22 or 17+12 and 17 'SPACE' 22 or 17'SPACE'12 for the same moves. 'B' is used when a token is moved off the BAR and 'O' is used to move a token off the board or alternatively white can also move to position twenty-five and black can move to zero.