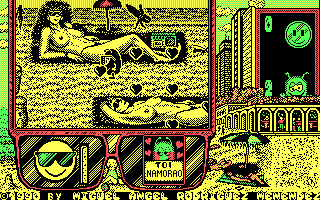 Toi Acid Game begins while the protagonist, the Toi, is having a date in a discotheque with his girlfriend, Zoi. And then, there appears the usual crazy scientist, in this case called Dr Acid, who kidnaps the hero's girlfriend with the intention to provide diversion to his diabolic creations. The small and roundish friend cannot allow this, so he goes quickly to her rescue. In order to accomplish it, he will have to face four different levels in which all kind of tiny beasts will try to cut his way. Thus, on the first stage, the disco, he will have to avoid some crude dudes, siphons, drinks which fall from above, etc., whereas he desperately looks for the eight plates that will allow the access to the next levels, which are: the beach, the pirate ship, and finally, the Acid House.