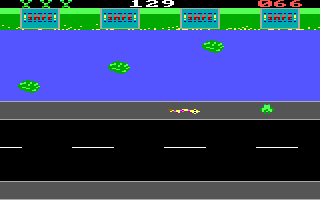 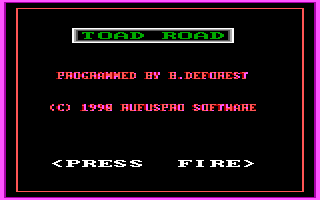 True to form, this Frogger derivative stars a green little amphibian whose only ambition is to make it safely to the other side of the screen. You, the player, must guide it carefully across a multi-lane city street, hopefully without getting squished in the bustling traffic. Then it's on to the river, where our toadie must employ logs and floating pads to keep from sinking. Once four croakers are safely nestled in their alcoves along the top edge, a new and harder round begins. Toad Road is controlled and played somewhat differently from the classic formula: instead of jumping from one grid position to the next, the toad takes small steps, and cannot backtrack at all - it can only go forward or sideways. Somehow, objects in the river don't impart any motion to their rider; as such it is necessary to keep walking sideways just to stay on top. Other distinctive behaviors include the number of logs and their movement patterns, the snakes that patrol previously-safe areas as the game progresses, and floating pads that only become visible from the riverbank itself (which makes it harder to plan moves in advance).