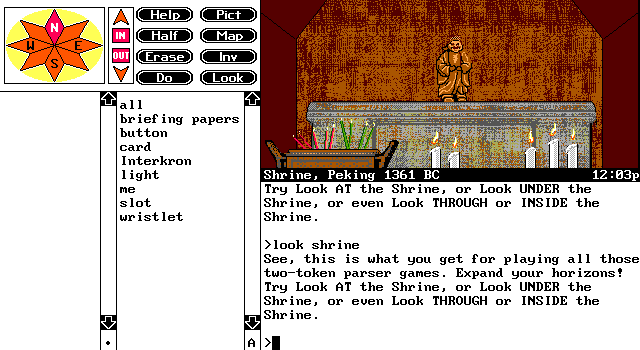 By the year 2090 AD, the usage of time machines (also known as "interkrons") became restricted. Temporal Corps strictly forbade traveling to the past due to potential unforeseen consequences of the traveler's actions. However, Zeke S. Vettenmyer, a Lieutenant in the Temporal Corps, has illegally acquired an interkron, traveled to various time periods and altered well-known historical events. As a result, the temporal disruption caused by his actions is threatening to destroy reality as we known it. A Temporal Corps private is sent to the past in an attempt to pursue Vettenmyer and reverse the changes he made to the world's history. Timequest is a text adventure with graphics utilizing the same interface as Legend's first game: it provides a long list of verbs to interact with still first-person screens displaying locations and people, but also allows and encourages typing commands for the same purpose. The player travels to six geographical locations within nine different time periods from 1361 BC to 1940 AD. It is possible to access any location at any time as the game begins. The player can opt to work on one location continuously, but often it is necessary to acquire items from different areas to solve puzzles. The famous events Vettenmyer has tampered with include the assassination of Julius Caesar in 44 BC, the attempted overthrow of the Caliph of Baghdad in 800 AD, Genghis Khan's siege of Peking in 1215, Napoleon's attack on Egypt in 1798, etc. Among the illustrious people the player encounters are baby Moses, Pope Leo I, William Shakespeare, Winston Churchill, and others.