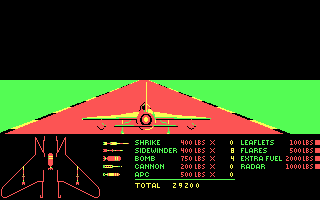 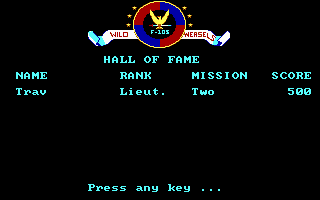 The game plot is set in times of Vietnam War, where you are American pilot of the Republic F-105 Thunderchief affectionately known as the "Thud", a conventional strike and "defense suppression" aircraft. North Vietnam was divided up by the US military into a set of target zones referred to for some reason as "Route Packages (RPs)". The most heavily defended area was "RP-6A", in and around Hanoi. To enter into this target area, the F-105s had to fly over a region of hilly ground that became known as "Thud Ridge". You are starting your career in "Wild Weasels" as Lieutenant, description of your first mission is to get the feel of your "Thud", but it is just a start of perilous and glorious ladder. The next missions vary from eliminating the Doumer tankers or bombing the bridge to dropping the leaflets or engaging the MiGs. Your rank may be raised if mission will be accomplished. In the very beginning of each mission you should read the mission description, accept of decline this mission, and equip your aircraft with weapons and supplies. Taking off the airbase either from Korat or another place, you should flight to your destination eliminating the opponent MiGs, run the "Ridge", and complete your mission. The gameplay flows in third-person view with common flight simulator abilities.