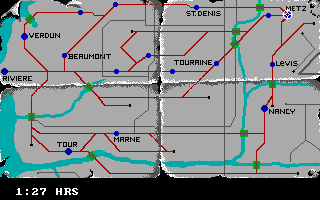 In the months before France is liberated by the Allies in World War 2, Germany tries to take Paris' collection of classic paintings. As Resistance member Pierre LeFeu, helped by wounded former engineer Le Duc, must prevent this happening, but taking the paintings by train to Normandy and Allied control. Once in control of the train, you must set the throttle level, ensure that there is enough coal in the furnace, control the speed, and ensure that steam is released when necessary. Use the provided map, and the communications network once released, to plan the strategic side of your mission. Each station has coal and water supplies which may be needed to keep the train running. You must raid railway stations in order to get track switches into the right position. Both this and the initial capture of the train involve aiming at the enemy, current indicated point, and ducking before their bullets can hit you. Taking control of bridges is similar - you control a cannon and must take aim.