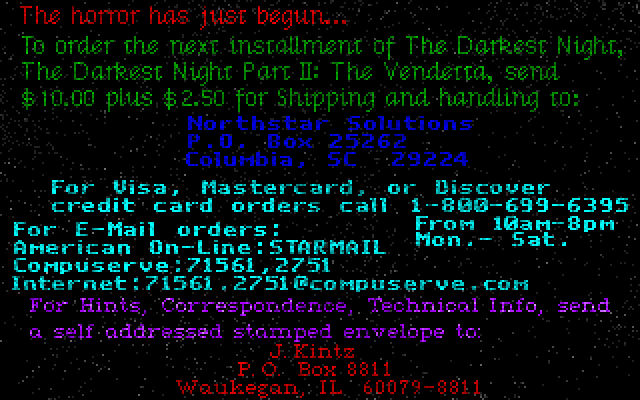 The Darkest Night is a graphical adventure game with a horror theme, set in the land of 'Tilorm'. The protagonist is a young antropomorhic fox called 'Rolan', who is lost in a forest after an evening of heavy drinking with his friends, celebrating Hallows Eve. While sleeping it off in the woods, he is awakened by a tattered and bloody yelling man, who comes running up to you, collapsing but managing to tell you of an evil cult trying to release the Demon Yaxagiraw tonight, a netherworld being who was imprisoned in an old Abbey hundreds of years ago, but who could be released again during Hallows night, when the souls of the damned are close to our dimension. Having delivered his warning, the man dies and leaves you to prevent the cultists from achieving their goal. The game is a graphical adventure with simple puzzles, using commands and objects from a menu to interact with the environment. The menu is brought up using the Enter key, and the commands are used by entering a single letter from a list: U(se)/G(et)/T(alk)/O(pen)/I(nventory) Movement is by arrow keys. Getting or Using and object brings up an Inventory list, where the currently held objects are listed, tagged with numbers or letters. Each object has only one function, but can be reused many times for testing it on a puzzle, they don't wear/run out. The whole adventure takes place in a forest, where the protagonist walks around on a path, sometimes encountering traps or dangerous creatures, and sometimes finds objects or buildings where the inhabitants of the forest - usually friendly animals and men, sometimes less friendly. The forest is filled with 'jump-scare' traps, which can be avoided by carefully listening to the sounds in every location. Usually the only thing Rolan hears, is the wind through the trees, but sometimes other things are heard, and proceeding forward at unawares usually results in an immediate and grisly death. The items found in the houses and on the path are key to bypassing most traps, though some of them have no way of dispelling them, but must be avoided. Mapping out the forest path is suggested, since the graphics repeat and the map is a maze. The game is a two-part shareware adventure which ends with you stopping the cultists, and registering the first get you the second part, called 'The Darkest Night part II: The Vendetta', through mail.